Study indicates 16% of UK dental professionals may have had COVID-19Less than 1% of dentists in the U.S. affected by COVID-19, study findsSunshine vitamin D and COVID-19: Is there a correlation?Fallow time calculator launched after AGP reviewOrganisers of IDS determine new guidelines for 2021 eventPeriodontal status may play role in COVID-19 severityThe dental hygienist in times of COVID-19Survey shows UK periodontists feel let down by government and regulators during pandemicAEEDC Dubai postponed to summer 2021Millions of missed appointments: UK dentistry feels heat from COVID-19
Visit microsite

Patents and patience: The rise of the SmileShop

SmileDirectClub has more than 300 stores in the U.S., Canada, Australia, New Zealand, the U.K. and Ireland, and is set to open hundreds more in drugstores across North America and Asia. (Image: rblfmr/Shutterstock)
Back to news
By Jeremy Booth, Dental Tribune International
September 18, 2020

NEW YORK, U.S.: A patent granted to orthodontics disrupter SmileDirectClub (SDC) in April ensures that no other company can duplicate its clear aligner retail concept for 18 years—a period around three times longer than the 2014-founded company has existed for. The granting of the patent might have gone unnoticed by many, but not by its competitors, including one-time partner Align Technology.

As the coronavirus pandemic dominated news headlines in April, a number of other developments did not receive the media attention that they deserved. SDC being granted a patent for its SmileShop retail concept was one of them.

On April 28, the Nashville-based teleorthodontics company announced that it had been issued with a patent for the intellectual property relevant to its flagship retail locations. U.S. patent No. 10636522 encompasses the concepts and processes that make it possible to run a teleorthodontics business through retail locations—including scheduling an appointment to receive an intraoral scan, from which an orthodontic treatment plan can be created and approved by a licensed dentist or orthodontist, and clear aligners delivered to the patient. Issued by the U.S. Patent and Trademark Office, the patent is valid until 2038, and this means that no other clear aligner provider will be able to run similar retail premises in the U.S. for the next 18 years.

This is a substantial gain for SDC. Even in the midst of a pandemic, the company’s retail-backed teledentistry concept has emerged as a strong competitor to dentist-led clear aligner therapy, and SDC now effectively has a monopoly on it.

“We will aggressively defend our business, our technology and our customer experience” – David Katzman, CEO, SmileDirectClub

The company also acted fast to demonstrate that it would enforce its patents through legal proceedings. The day after the patent was issued, the company filed a lawsuit against competitor Candid Care. SDC alleged that Candid infringed on its intellectual property through its operation of a copycat retail model, known as Candid Studios, which began opening two years after SDC opened its first stores. David Katzman, CEO of SDC, stated in a press release: “We are now able to better defend ourselves against copycat models, including Candid, who have built entire companies by directly replicating our successful teledentistry platform. We will aggressively defend our business, our technology and our customer experience,” he emphasized.

SmileDirectClub’s dispute with Align Technology was also related to shops

SDC has more than 300 SmileShop stores located across the U.S., Canada, Australia, New Zealand, the U.K. and Ireland. The company is poised to open SmileShops in major cities in Germany this year and is in the process of opening hundreds more within the retail premises of its drugstore partners CVS Health in North America and Watsons in Asia. Owing to a retail-related noncompete provision that was included in a supply agreement with Align Technology, the teleorthodontics company has faced little competition in its push for the lion’s share of the fledgling clear aligner retail segment. 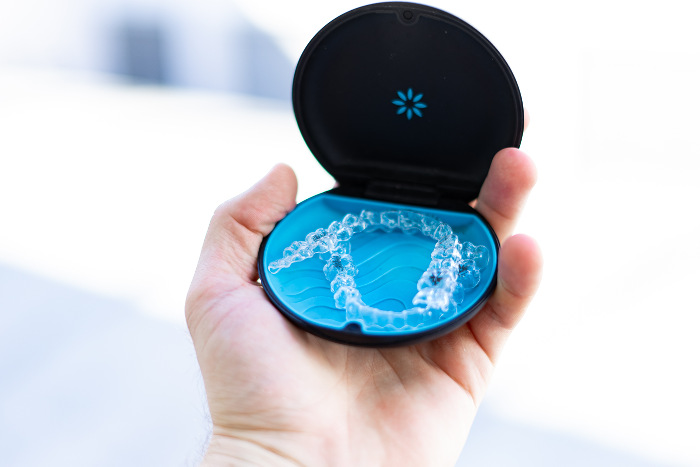 In 2016, when SDC just was 2 years old, it entered into an agreement with what is now its biggest competitor: Align Technology became the exclusive third-party supplier of clear aligners to SDC. SDC would receive molds or scans of patients’ teeth and have an orthodontist from its network review them, and Align Technology would ship the bespoke clear aligners to SDC. As part of the agreement, Align Technology acquired a 17% stake in SDC valued at $46.7 million (€38.8 million, according to the average exchange rate for 2017), and the Invisalign maker also gained rights to a seat on SDC’s board of directors. A year later, Align Technology acquired an additional 2% of SDC.

Joseph Hogan, CEO and president of Align Technology, commented in a press release at the time: “This doctor-directed, at-home model follows the trend towards other convenient and more affordable at-home solutions for procedures including contact lenses, hearing aids, and diabetes care. At-home teeth straightening is only possible with clear aligners, and as the leader in clear aligners, we believe we must participate and help shape this new model.”

Hogan explained that Align wanted to support SDC while also expanding the market opportunity for its Invisalign doctors. “When we look at the volume of Invisalign cases, 2% or less fit the SmileDirectClub protocols, which means we expect there to be very little cannibalization of the existing market,” Hogan said.

Align did not manufacture all of SDC’s aligners during the partnership, but it was an enabler of SDC’s early expansion, as it helped the young company to meet rising demand. Align Technology earned around $28 million from clear aligner orders from SDC in 2018.

Here is where things became tricky. The agreement between the companies, which took effect in October 2016, was set to expire—unless renewed by the parties—at the end of 2019. In February 2018, however, SDC accused Align Technology of breaking the noncompete clause of their agreement by opening its own clear aligner locations. In 2017, Align Technology had begun opening Invisalign stores, and it expanded this pilot program in 2018 to 12 locations in major U.S. cities.

Legal arbitration between the two parties favored SDC, and Align Technology announced in March 2019 that it was required to shutter its 12 Invisalign stores and return its stake in SDC to the company at its 2017 value. The supply agreement has now ended, but the arbitrator extended its noncompete provisions until August 2022.

Align Technology now has around two years to contemplate whether it will reenter the clear aligner retail segment in the U.S. and how this might be possible without infringing on SDC’s freshly minted patent. In the meantime, SDC has made clear that it is willing to compete with the Invisalign maker outside of the retail space by selling clear aligners directly to dentists and by launching a clear aligner system for teens. The rise of the SmileShop continues.

CHARLOTTE, N.C., U.S./BENSHEIM, Germany: After a series of groundbreaking product and solution launches, Dentsply Sirona’s sights are now set on creating the best possible workflow solutions for implant dentistry professionals. The idea is to identify customer-unique solutions that enable high-quality treatment while saving time and effort. As the recent launches of Azento, Astra Tech Implant EV and Acuris have shown, the company intends to remain an innovative leader in implant dentistry.

Periodontal disease, acute trauma, ill-fitting mouth guards—these are just a few examples of problems that could compromise athletic performance. As a result, sports teams in most countries have realized the need for specialized dental care, and dentists are increasingly being regarded as essential members of the sports medical team. New York-based dentist Dr Andrew Sarowitz is in charge of the dental health of the National Basketball Association’s (NBA’s) Brooklyn Nets basketball team and works with mixed martial arts (MMA) fighters.

Interview: “As dental coaches, we are servants in a noble profession”

Dental consulting and coaching services provide advice on dental management and marketing and help dentists grow their practices. Just recently, Dental Tribune International spoke with Kirk Behrendt, founder and CEO of ACT Dental, about his experience as a dental coach. In this interview, Behrendt talks about some common mistakes in dental practice management and discusses the role that social media and continuing education play in dentistry.

NASHVILLE, Tenn., U.S.: Eight weeks is a long time for SmileDirectClub (SDC). Dental Tribune International last reported on the teleorthodontics startup in September, just days before it offered tens of millions of shares to investors. SDC is due to report its first earnings as a public company on Nov. 12 and investors already have a lot to consider, such as growing regulatory restrictions, a new production facility and international expansion.