A bull thrusts its horns into the air, while a bear strikes downward with its paws: when it comes to metaphors, dental stocks tends to be more bullish in nature. (Photograph: Inked Pixels/Shutterstock)
Back to news
By Jeremy Booth, Dental Tribune International
September 16, 2019

LEIPZIG, Germany: The dental industry currently generates global annual sales of around $25 billion and continues to be an arena for consolidation and mergers. With major companies making financial headlines this year through a string of public offerings, the spotlight is back on dental stocks. We asked Baird investment bank senior analyst Jeffrey Johnson about the growth areas of the dental industry, what drives the performance of dental stocks, and how might a potential economic downturn affect them? 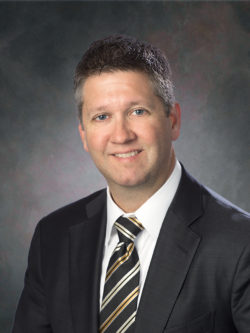 Jeffrey Johnson is senior research analyst at Baird where he consults on healthcare and medical technology stocks. (Photograph: Baird)

Back in May, Business Insider listed dental manufacturers Dentsply Sirona (XRAY) and Align Technology (ALGN) as being among its 15 picks for the best-performing S&P 500 stocks for 2019. Shoulder to shoulder with makers of microchips and biotechnologies and providers of online payment services, these two dental companies were touted as good investments. Analysts, meanwhile, expected major distributors and manufacturers such as Henry Schein (HSIC), Patterson Companies (PDCO) and 3D Systems (DDD) to keep the dividends flowing. A number of dental companies have beaten earnings expectations so far in 2019, but how would they perform in a potential economic slump, which some analysts have warned may be on the horizon?

The requirement for medical care persists under all economic conditions and people would forgo other spending before saving on their health. They may, however, put off nonessential treatment. According to Johnson, dental stocks are more exposed to consumer behavior than other stocks in the health care category.

“Within health care,” Johnson said, “dental does tend to have a bit more consumer discretionary exposure, whether that’s in some of the cash payment, higher-priced areas where treatment can be deferred for a while, such as tooth whitening, or on the equipment side, which makes up nearly 25% of the global dental market.” He explained that, while dentistry remains partially shielded from market conditions, a modest decline can be seen in periods of recession as dentists opt to delay capital investments. “Even in other areas of dental, there can be trade-offs or ‘trade-downs’ as we saw in the last recession, where a patient chooses a large filling instead of an implant or crown, or maybe even decides to have the tooth pulled instead of getting that $1,000 crown done.”

“[Investors] understand dental technology, or know someone who has had a hip replaced”

Johnson has been consulting on health care and medical technology stocks for over 15 years. Based on his experience, he said investors generally like the two categories owing to their consistent revenue streams, but also because they can relate to what they are investing in. “They understand dental technology, or know someone who has had a hip replaced,” he said.

Outlook and growth categories in dental

Dental stocks have had a somewhat mixed performance so far in 2019, according to Johnson. He said a growing macroeconomic uncertainty in financial markets is influencing the dental space, but he also noted that investors are increasingly worried about the more direct pressures being applied to dental companies by competitors. How might growth in service offerings from dot-com giant Amazon and other online distributors affect major equipment suppliers such as Henry Schein and Patterson Companies? And how will the continued expansion of disruptor SmileDirectClub affect the performance of Align Technology’s Invisalign clear aligner business over time? Johnson said that these are some of the open questions that investors are having to consider.

According to Johnson, specialty areas in the dental industry are currently seeing growth and market-leading companies that serve these specialties are doing well. He said, for example, that Baird believes that the dental implant market is likely to grow by about 5% annually, but he pointed out that the Straumann Group (STMN) has delivered double-digit revenue growth for the past few years. Headquartered in Switzerland, the Straumann Group is active in a number of specialty areas, including CAD/CAM prosthetics, digital equipment and software, dental implants, instruments, and biomaterials. According to Johnson, Baird also sees orthodontics as another growth area. “We believe the orthodontics market, overall, when considering both standard brackets and wires and clear aligners, is also likely growing by mid-single digits, yet Align Technology has been growing its revenue by 20% per year or faster for the past few years.”

Outside of these areas, Johnson observed that dental companies have seen revenue growth in the low to mid-single digits over the last few years.

The lifeblood of dentistry

Speaking at the 2019 Baird Global Healthcare Conference, held on Sept. 4–5 in New York, Donald Casey, CEO of the world’s largest dental company, Dentsply Sirona, said that innovation and participation in growth markets will be key factors in maintaining margin growth. Casey said, “We would like to think that we are able to generate significant new product and [that] we should benefit from global scale where we are able to participate in faster-growing markets.” He told attendees that innovation is the lifeblood of the company, and that its two categories of dental consumables and technology and equipment would continue to generate margin growth in the coming years. “Good, balanced innovation across the two of those [categories] really is driving the industry,” he added.

Johnson said that those investing in the dental space tend to be large financial institutions. Many of them are in it for the long term and hold their stocks for years, but hedge funds and other shorter-term investors are also involved—typically in the faster-growing areas of the dental industry where a more pronounced volatility around quarterly results can be seen.

“As for dentists who invest in the space they know and love, we are aware of a couple of groups of dentists that will invest in earlier-stage dental technology, but that’s not a part of the market we are overly close to,” Johnson said.

PLYMOUTH, UK: The usefulness of stem cells in the regeneration of dental and other body tissue has been established by numerous studies, though their potential in a clinical setting has yet to be proved. An international team of researchers has discovered a specific gene that increases stem cell activation and tissue regeneration during tooth healing, potentially offering a novel approach to tooth repair.

Age and race may impact frequency of dentist appointments

NEW YORK, U.S./HONOLULU, U.S.: Good oral health is increasingly recognized as an essential part of healthy aging. It is closely related to overall health status and quality of life, and regular dental checkups can prevent oral diseases and help maintain oral health. However, regularly seeing a dentist is a challenge for many Americans, especially older adults, racial and ethnic minorities, and immigrant populations, new research suggests.

Earlier this year, Kuraray Noritake Dental invited dental professionals from all over Europe to a symposium in Berlin in Germany that highlighted the newest research and clinical findings on the KATANA Zirconia Block, the latest addition to the KATANA family. One of the presenters was Dr Nicola Scotti, an assistant professor at the Department of Cariology and Operative Dentistry at the University of Turin’s Dental School and operator of his own private practice.

VANCOUVER, British Columbia, Canada: Dental caries represents one of the most common chronic diseases in young children and is a multifactorial disease. Women exhibit higher caries incidence than men, but it remains unclear whether the same disparity is found in children. A poster presentation on the topic of sex-specific differences in the microorganisms associated with dental caries found in children’s saliva was given by Stephanie Ortiz of the Oregon Health and Science University, Portland, U.S., at the 97th General Session and Exhibition of the International Association for Dental Research (IADR).